The idea of moving the engine shed looked immediately convincing on the first test. It's a much more balanced layout now that offers more possibilities and looks less crammed despite it's short length. So I waited no longer and added the new switch, added the new loco shed rail and added some centimeters to the freight shed track.

The advantages of not starting with weathering the rails and ballasting are that I could run a few trains for fun and experience the layout in "operation mode". The VT 98 DMU arrived and departed with commuters, sometimes taking a freight car with it and spotting it at the freight shed. The daily freight service brought cars in and picked up others. I experimented with mixed passenger and freight services. All great fun and in general prove that the track plan works.

Still some things kept nagging me.. Like the situation at the end of the layout where everything seems a bit too crammed. I had thought that the engine shed at the end of the line was a good idea, something special. There are a couple of prototype examples, and showing such a special situation on my layout seemed a nice change to ordinary terminus plans. Also, it would help block the view to the short end of the layout.

I simply do not have enough length in my layout room. The platform became too short and required an awkward extension over the run-around switches. Even with my plan to only run DMU's in passenger service and a 2 car VT 98 fitting just, it looked too crammed.

So yesterday evening - after having freed my mind at the Karate training - I picked up the engine shed, lifting it from its current position and putting it down at the other end, the station entrance. This will require the addition of a switch for a new engine shed track between the raised platform and the main line.

In its new position, the engine shed provides nice backdrop to incoming trains. Views to the long loading platform are still possible. I even like the fact that it is a bit hidden. I took a few snapshots which I show here. Though they do in no way justice to the look & feel which is in reality much better.

The passenger platform on the other end is now long enough (ca. 65 cm) for a short line station. Another benefit is that I can extend the track of the freight shed to hold 2 cars. This makes it also look less crammed and adds another position for cars to be spotted to. 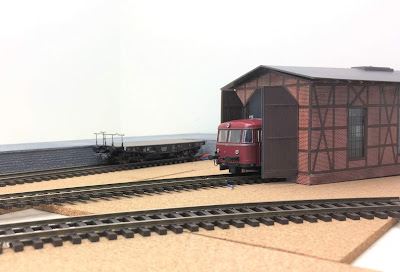 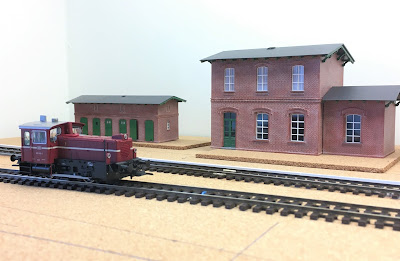 A while ago I assembled a weigh bridge for my new Elmslohe station, a kit from Auhagen (No. 11404). The Auhagen kit also comes with a loading gauge. However, I was never too fond of it as the gauges look rather massive. I finally took the box out again to have another small project to do. I put a new blade in my knife holder and with some cutting and sanding I got the gauges to something that is usable in my view. It is surely still not of a Weinert quality, but considering the price-quality-ratio it is more than acceptable.

I primed the loading gauge with Tamyia light grey primer, and liked the look of it, no need for a further paint coat. I just weathered the model lightly with thinned black Tamiya paint. 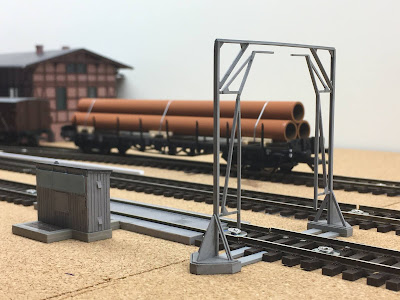 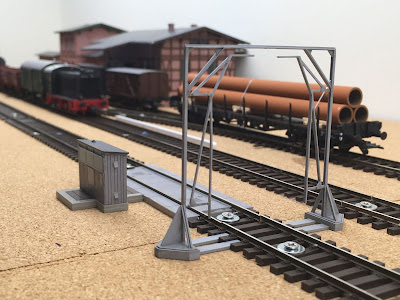 Great inspirational video in which we can follow a local goods train in Sheffield in the 1960s, shunting various sidings and using diesel as well as steam power. Unfortunately this video is also documenting the beginning of the end of small goods depots and the complicated shunting work we love so much on our model railways.


And while we are already in the Sheffield area, why not watch again (and again) Michael Palin's Confessions of a Train Spotter:

New in my railroad library is Otto O. Kurbjuweit's latest book "Rangieren, aber richtig" (switching, the correct way). It offers many prototype examples from mostly Germany and Austria, all explained in detail and documented with many pictures. Amongst others it shows interesting operations on the Austrian 1000mm narrow-gauge line from Vöcklamarkt to Attersee which I have also visited a couple of times when living in Salzburg. But also a number model railroads are featured, with track plans and examples of switching operations. I am particularly drawn to the 0 gauge layout "Volpe Süd" by Michael Stern, a freight only line with many industries and operation possibilities. The book is definitely a recommendation for any model railroader interested in realistic switching operations. 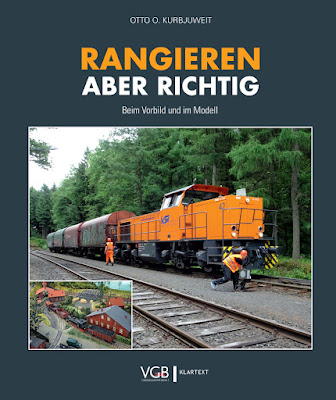 I progressed slowly, but steadily with the pair of Bundeswehr MB 1017's. As written in my previous post these will provide me with an additional transportation opportunity on my Elmslohe layout. After painting (3 coats of Humbrol 42 to represent the Bundeswehr olivgelb for period IV) and assembly of the cabin, I added details and painted head and backlights, reflectors, mirrors, etc. Finally, I applied the number plates. Still to be done are the rear fenders that I don't like from the Kibri kit, so I will need to make them myself. 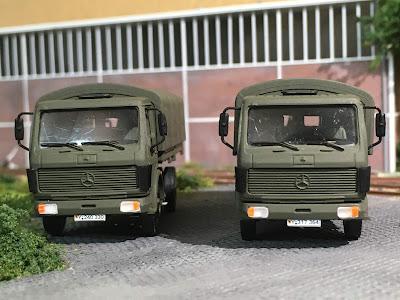 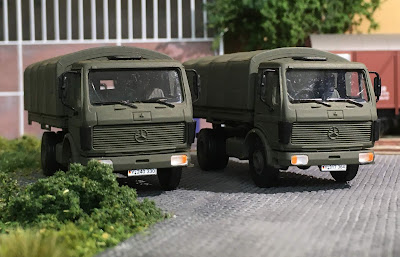 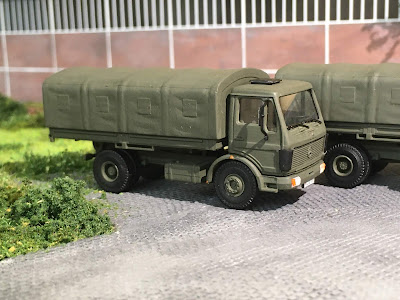 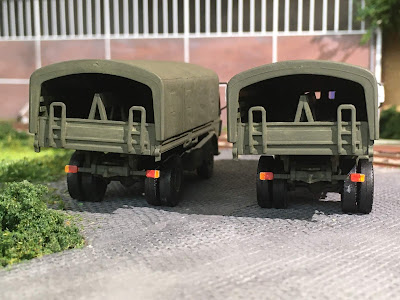 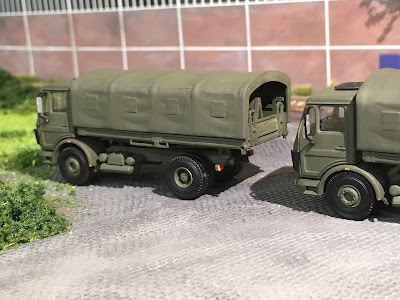 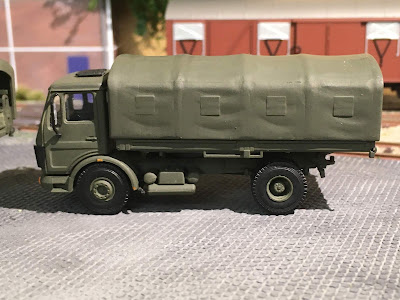 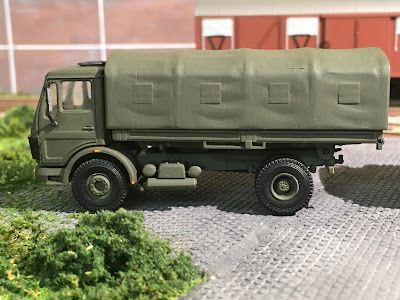 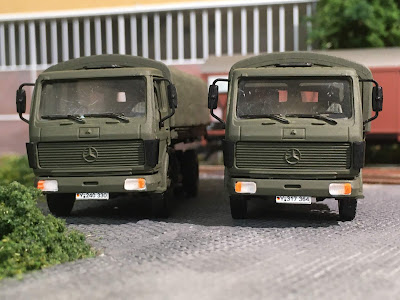 I am not a military modeller. But I like freight and switching operations on my small layouts and therefore grab every excuse for a new source of traffic: the small town of Elmslohe is home to barracks (a "Kaserne") of the "Bundeswehr" and some of their transport is carried out via the railroad. Recently two Mercedes Benz 1017 trucks could be spotted at Elmslohe station.

The trucks are brand new as they first came into service in the mid 1970s, perfect for period IV operations (I want to build Elmslohe so that it can be operated alternatively in period III and IV).

The MB 1017's are from a Kibri kit (No. 18051) that I bought at the latest event I participated in with my Dutch layout Valkenveld. Amongst others I used the images featured here for the paint job. I used Revell 42 olive-yellow representing the 1970s Bundeswehr base colour, applied in three coats.

I also went through the typical stages of a modeller's roller-coaster of feelings. I enjoyed this little project a lot, especially after working on stuff like the lighting and cabling of the new layout. As I am no Bundeswehr truck expert, I searched the internet for images of details, colours, etc. Then you discover many flaws in the model kit (like the weird fenders on the rear-axle, etc.), questioning yourself whether to fix or leave it, and ultimately losing lots of the original enjoyment of a simple build - until you put it into perspective and move on. As for the fenders: I didn't mount them as of yet and will build my own version of it. Unless the next project tempts me even more...

Immediate next steps in this little project: assembly of the cabin, applying decals, final touches of paint and top layer of matt varnish. 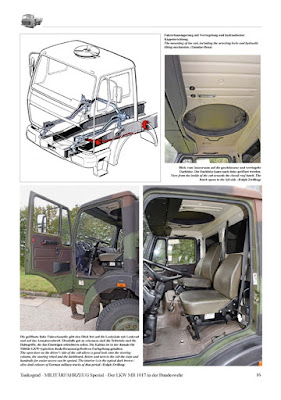 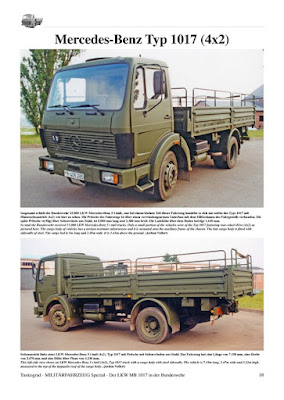 This blog covers the evolution of my H0 (and N) scale model railroading projects.

My current VALKENVELD shelf layout is a 150 x 30 cm H0 switching layout based on the classic "Inglenook" concept. It's the early 1960's in the fictional town of Valkenveld in The Netherlands. The layout resembles a small yard on a freight-only short-line serving several industries. The layout was exhibited already a couple of times, for example twice at EUROSPOOR in Utrecht (2016 and 2018) and at the MTD event in Belgium (2019).

Currently a new layout, ELMSLOHE, is in the making. The new L-shaped layout of 250 x 110 cm plus 120 cm fiddle yeard will represent a terminus in Northern Germany around 1968.

I believe that in model railroading "small is beautiful" and can provide lots of building and operational fun. I am therefore particularly interested in small and micro layouts, shelf layouts and switching layouts 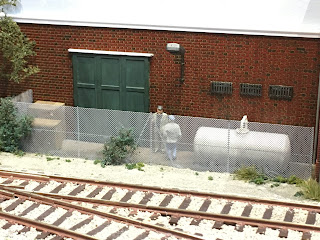